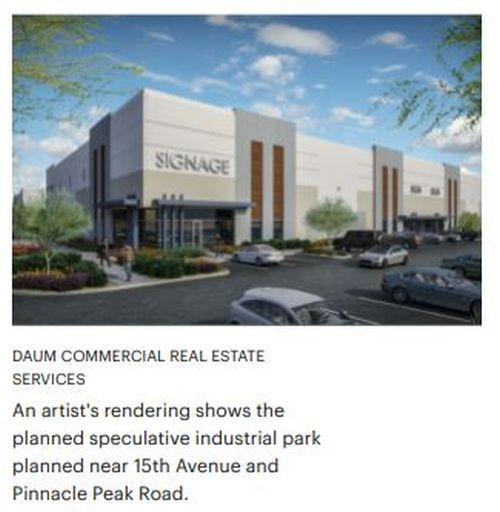 By redoliveMarch 8, 2022No Comments
30 Mar 2021
Land sales for industrial projects remain hot in the Valley.
A Utah-based developer has bought 10 acres of land in the Deer Valley area of north Phoenix and plans to build a speculative industrial development. Wadsworth Development Group bought the land, at 15th Avenue and Pinnacle Peak Road, for $6.4 million. The company plans to build a three building industrial park totaling 136,000 square feet, which is expected to be complete in August. Robert Lundstedt, Skip Corley and Chase Heinemann of Daum Commercial will be the leasing brokers for the development. “As there continues to be an influx of tenants looking to expand or relocate to the Phoenix area, which is located within a 17-hour drive of anywhere in the Southwest, developers are hungry to bring competitive industrial facilities to the market to capitalize on this high demand,” Lundstedt said. “The Deer Valley submarket in particular, which saw vacancy rates compress to under 5% in (the fourth quarter), is well positioned for further growth.” In central Phoenix, Phoenix-based ViaWest has acquired 10 acres in the Sky Harbor Airport submarket, at 3232 S. 48th Street, and plans to develop an industrial project, called Airport48 Industrial.
Isy Sonabend and Drew Eisen of NAI Horizon represented the seller, 4 P’s LLLP of Peoria, in the $4.57 million deal, which closed March 4. ViaWest plans to begin construction of the 146,500-square-foot building in the third quarter of 2021 and complete construction in the second quarter of 2022. “There is very limited developable land left in this submarket, so we are very excited to be building another greatly sought-after infill industrial development with high visibility on (State Route) 143,” Alex Boles, ViaWest Group’s director of investments and development, said in a statement. In Chandler, after selling the first phase of the Lotus Project industrial development for $91 million, Conor Commercial Real Estate and joint venture partner WHI Real Estate Partners have broken ground on the second phase. The second phase will add three new industrial buildings, totaling 300,000 square feet to the development, which is located near Loop 202 and Kyrene Road. According to CoStar data, 14.4 million square feet of industrial space is under construction in the Phoenix metro, representing 3.8% of the market’s existing inventory. Of the space under construction, 63% is available for lease. The lion’s share of the construction is in the West Valley, with 60% of the space under construction in Glendale, Goodyear and Tolleson.
Corina Vanek Reporter
Phoenix Business Journal